Skip to content
Issue 1: Getting Upstream to Avoid Tragedy

Resilience is a critical life skill, allowing each of us to grow better, stronger, wiser through the inevitable adversities of life.
Our objective is to help one become more resilient — preparing for the storms of life, weathering those storms, and bouncing back without getting stuck in the toxic emotions of guilt, false guilt, anger, and bitterness.

Our distinctive with Resilience God Style is the full integration of Biblical truth into the resilience equation: “Not by might nor by power, but by My Spirit, says the Lord.” While we will milk wisdom from every discipline and walk of life, it will be Biblical principles and profiles in resilience which are foundational in our resilience journey together.

As with our Resilience God Style books, videos, and games; we will use the Resilience Life Cycle© model shown below: 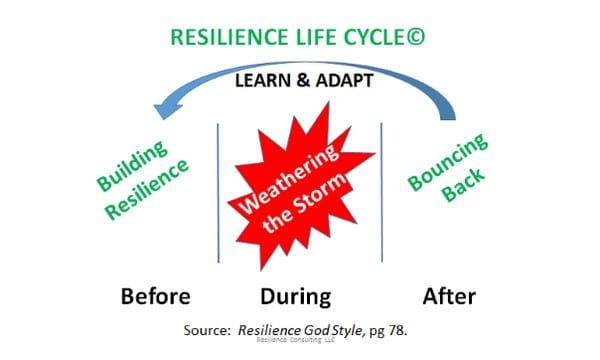 This particular edition is devoted to an unpleasant, but very real topic: The Suicide Epidemic in America. Each of us has been impacted directly or indirectly by this tragedy. It is easy to describe the alarming statistics, but much harder to identify lasting solutions.

We originally began the Resilience God Style campaign to combat the military and veteran suicide dynamic. Our materials soon proved relevant far beyond the military community to Americans at every age and stage of life. May this content, and the many ideas and experiences which you may choose to share, truly help fellow Americans regain hope and develop coping skills which put them far upstream from suicide.

My prayer for each of us is that we might learn and model Christ-like resilience as we navigate the storms of life and help others to do the same. Jesus said “In the world you will have tribulation, but take courage, I have overcome the world.” (John 16:33). Resilience God Style allows us to be the overcomers which God intended us to be.

“This tragedy is another indication that suicide knows no bounds, cutting across all ages and stages of life, unimpressed by fame, fortune, or status.”
– Bob Dees – 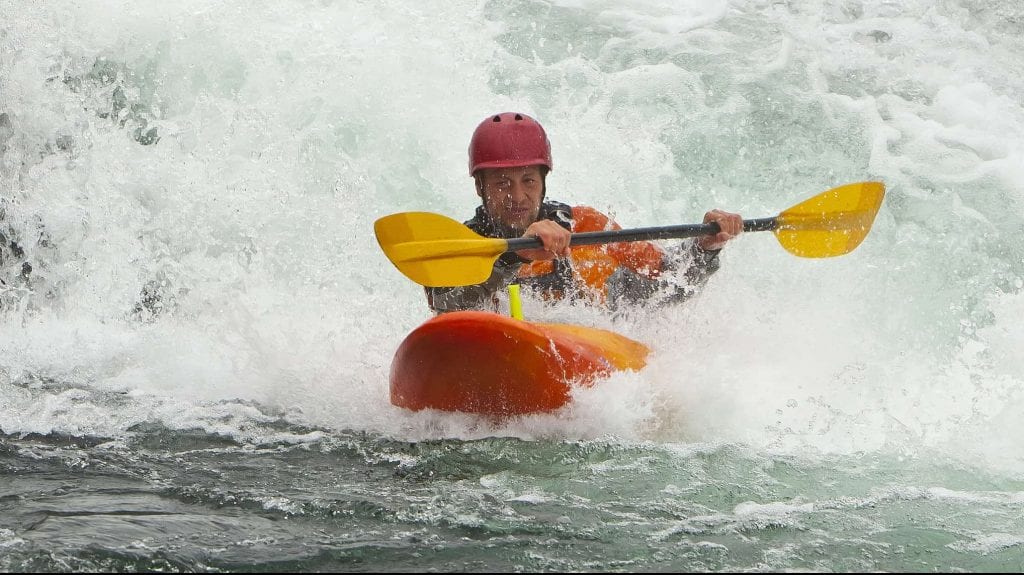 Getting Upstream to Avoid Tragedy

Today I will attend a funeral – a father who took his life. Loving family, successful business, active in church – hard to understand, yet very real. This tragedy is another indication that suicide knows no bounds, cutting across all ages and stages of life, unimpressed by fame, fortune, or status. We see it everyday in America. In our veteran community alone, there will be twenty who lose all hope and end their earthly lives- today, and every day. To illustrate this point even further, there have been two three-star flag officers in the military who also took their lives in the last eighteen months.

Suicide is yet one more American epidemic that continues to defy the best secular approaches our nation’s mental health experts can offer. Certainly, their efforts to reduce suicide are not in vain, but is there anything else we can do to stem this ultimate loss of hope across our land?

Looking back to my experience as a military commander, I recall the cardinal importance of “setting the conditions” for success prior to putting troops in harm’s way – rigorous training, good intelligence, use of long-range fires to soften the target, proper logistics, and so forth. I often called this “getting upstream” to insure we had done everything possible to ensure that we accomplished the mission, and that we brought our troops home alive.

This principle applies equally to suicide prevention – we must get upstream in a person’s life to develop resilient reflexes to deal with the inevitable hurts, stressors, disappointments, and disillusionments of life. Regrettably, such a preemptive approach is seldom pursued, particularly in the “politically incorrect” realm of faith-based protocols. To ignore spiritual wellness as a foundational suicide prevention component represents medical malpractice.

Faith-based programs have proven highly effective in drug rehabilitation programs, restoration of the incarcerated, and suicide prevention among veterans, active duty military, and the general population. Tragically, such faith-based programs are seldom given a seat at the mental health or suicide prevention tables, despite the deep body of empirical evidence that illustrates that “faith makes a difference,” sometimes all the difference in a person’s ultimate life decisions.

While this is not the venue for an empirical analysis, here are a couple of long-standing data points that validate the critical faith factor:

To highlight a recent example of a national suicide prevention initiative, President Trump signed an executive order to establish the PREVENT program to reduce veteran suicides. This order properly establishes a Department of Veterans Affairs (VA) task force to address the issue. Historically, however, the VA and the Department of Defense (DOD) have resisted full consideration or inclusion of faith-based protocols — to the detriment of overall readiness, resilience, and resistance to the toughest of life challenges. With this Presidential Executive Order which broadens inclusion of faith-based programs, prayerfully the body of highly effective faith-based veterans programs will have a new seat and voice at the table.

While veteran and military suicide epidemics receive significant visibility (although more is still needed, along with effective solutions), the reality is that this is not a veteran problem, it is an American problem. You can do an internet search for any demographic in America and you will find the statistics are equally alarming, illustrating broad and alarming increases in suicide occurrence. For instance, consider the Los Angeles Times Headline on June 18, 2019 which warns “Suicide Rates for U.S. Teens and Young Adults are the Highest on Record.” In November, the CDC reported that an average American’s likelihood of dying by suicide at any given age rose 33% between 1999 and 2017.

Clearly, American suicide trends are alarming, and the generational impacts are devasting. While a deeper analysis with be useful in future newsletters, I must observe that the current culture of violence and death in America (as depicted in Resilient Nations , Chapter 7) plays a part in these trends, essentially devaluing life (to include one’s own life). As well, current cultural trends work against the development of resilience at an early age, leading to an inability to get better, wiser, stronger through the small and ever bigger challenges of life. “Everyone gets a trophy” establishes an unrealistic mindset in our youth that there are never failures or disappointments in life, leading to the perceived need for “safe spaces” and “trigger warnings” on today’s college campuses and beyond. Failure of our society and families to inculcate resilience at an early age also contributes to our nation’s worsening suicide trends.

Now, back to the main point — We must get Upstream to Avert Tragedy. Faith makes a difference, a real difference in the real fight against suicide and for resilience. Let’s get everything in the fight on behalf of the many who will consider killing themselves today, America. 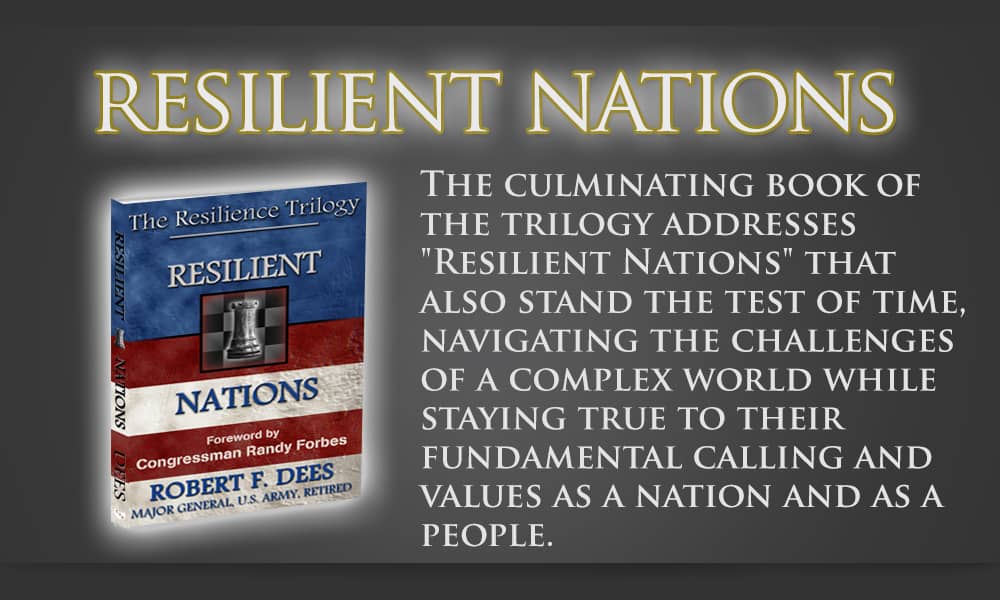 As Americans head into another Presidential Election Cycle, this book helps readers “keep the main thing the main thing,” highlighting the fundamental nature of America that is at risk today. Go to the resources page to learn more and save 20% off the list price.
Plus, I will send you an autographed copy.
Resilience God Style Resources > 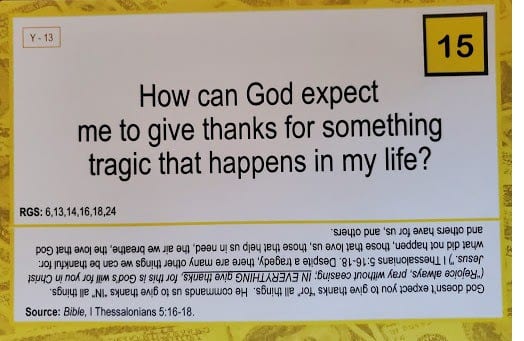 Here is a question from the Resilience God Style Training Game. How would you answer this?
Grieving is necessary to bouncing back from a deep loss. A key step is to invite others into our grieving process, starting with God. Why is this important?
Here is the suggested answer from the bottom of the card:
God is committed to providing comfort to those who mourn. David in the Psalms wrote “The Lord is near to the broken hearted and saves those who are crushed in spirit.” (Ps 34:18)
In the Sermon on the Mount, Jesus says “Blessed are those who mourn, for they shall be comforted.” (Matt 5:4)
Inviting God and others into our grieving process is an important way to avoid spiraling into isolation and counterproductive thought patterns.

(Related to suicide discussion) “Well said brother!! In total agreement and grateful for your seminal work to impact and change the disruptive hurts and habits of those in need .” ~Chaplain Mark Benz