Prayerfully you had a great Thanksgiving as you practiced being “Grateful for Grace” (referring to last week’s edition). Now we enter the period called “Advent,” a time of waiting for the celebration of Christ’s birth and the anticipation of Christ’s Second Coming. This is really a pretty good analogy for resilience — looking back to celebrate and learn, and looking forward to anticipate and prepare.

As well, this season of Advent emphasizes waiting, a critical life skill. Waiting is hard, but it has many advantages. Consider Isaiah 40:31– “They who wait upon the Lord shall renew their strength…” As you navigate the time of waiting between Thanksgiving and Christmas, may you also renew your strength, refill your well of courage, and hear the still small voice of the Lord in special ways. Instead of holiday craziness, may all of us experience holiday freedom — free from facades, free from fear, free from frenzy. A great holiday verse — “Be anxious for nothing, but in everything by prayer and supplication with thanksgiving, let your requests be made known to God, and the peace of God which passes all understanding will keep your hearts and minds in Christ Jesus.” (Phillipians 4:6,7)

This edition’s article is entitled “Pursuit of Happiness,” an apt reflection as we see the chase for Christmas happiness all around us. I highlight a very special lady I met in the Nashville airport, a lady who pursued and found true happiness and meaning in life. As you will see, her happiness was not wrapped up in gifts and joy seeking, rather in the quiet satisfaction of service and relationship with God and others. We all have much to learn from Doris– may her tribe increase!

This edition also has the normal “Bounce Builder” question for discussion with family and friends, as well as the pre-Christmas discount offered in the Resources Section — $10 off on the tabletop Resilience Training Game w/ Promo Code “FAM2”. I am prayerful that you will use this game to grow in personal and family resilience as you navigate the inevitable challenges which the New Year will bring. Try it, you’ll like it.

Our Resilience God Style website (newsletter tab) has an archive of all past RGS newsletter content archived for your future reference, or for you to share with others.

Be assured of my prayers and cheers as you get ready, weather, and bounce back from the small and large storms of life. May you be Resilient – God Style!

What profit is there to the worker from that in which he toils?
I know that there is nothing better for them than to rejoice
and to do good in one’s lifetime; moreover, that every man who eats and drinks
sees good in all his labor–it is the gift of God.
~ (Ecclesiastes 3:9, 12, 13) 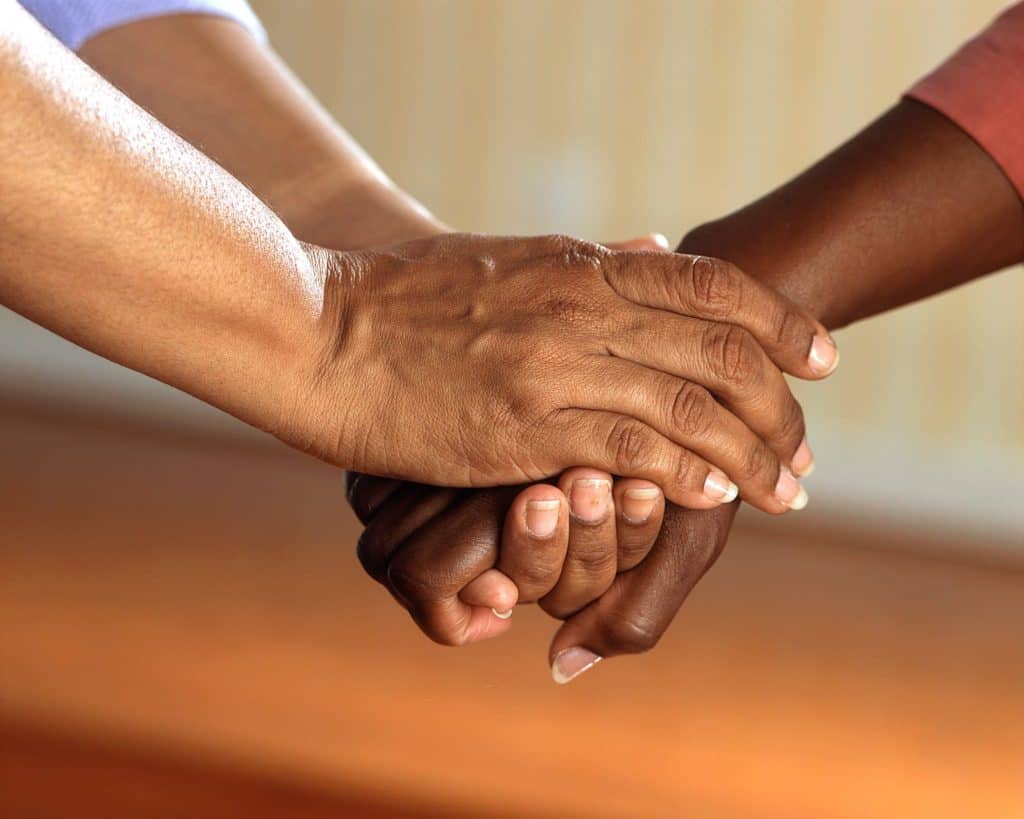 Early one morning I found myself with some unusual “idle time” in the Nashville airport. Walking past the entrance to the Transportation Security Agency (TSA) checkpoint, I noticed an elderly African-American lady scurry up, looking very dignified in her well-pressed volunteer clothes. Her apparent duty was to serve at the volunteer desk just outside the security checkpoint, answering any questions for harried travelers, and imparting a final dose of Nashville hospitality to departing visitors of “Music City USA.” Drawn by her sense of dignity and purpose, I walked over to the volunteer desk as Mrs. Doris Francois was getting settled. I knew there was probably a powerful life story behind this dignified elder and I was right. Beginning the conversation with something like “You are really up early!” I spent the next thirty minutes hearing about a fascinating life and a true Profile in Resilience.

Early on she wanted to be a missionary or a nun. Most women at that time would be a teacher, an office assistant, or work at the Post Office. Despite the odds, and after praying the Lord would direct her path, Mrs. Francois decided she wanted to be a doctor — this would be her “pursuit of happiness.” While persisting with her medical education, she worked part-time for $3 per shift and car fare (7 cents for a street car and bus to get to her job). Wanting to attend a good medical university up North, she was told she had many strikes against her as a woman — poor, colored, Catholic, entering a field dominated by males, and being hearing-impaired. Many predicted she would fail, yet Doris Francois stayed the course to become a medical doctor, a pediatrician. Her subsequent distinguished medical career allowed her to be the hands and feet of the Great Physician in varied children’s hospitals, internal medicine and family practices, community-based clinics, and State of Tennessee care facilities for disabled clients.

Retired since 2000, Mrs. Francois at age 81 still volunteers and makes a difference in someone’s life every day, now working with the Flying Aces volunteer group at the Nashville airport for over ten years. The pearls of wisdom which flow from her years of caring for others read like the Proverbs:

“Do not exploit people. There are no failures, just challenges in life. Be kind and good to people and you will have impacted them in a positive way. Do what you are passionate about. Be self-sufficient and independent. Learn from your experiences every day. Always wake up being grateful.” This is sage advice from one who could have easily succumbed to the lure of dependency and entitlement.

Her reflections on the current status of America are equally profound. In her own words: “We don’t seem to share and care for people and their welfare, racing on the fast track of selfish pursuits. Taking prayer out of schools has impacted our national morality. Loss of discipline and respect in the family, as well as preoccupation with cell phones and 24/7 media, has robbed us of the ability to play and worship together. So many are learning to take the road of least resistance, seeking whatever is pleasurable for the here and now. So many brilliant and talented young people whose minds should be prepared to lead us in the subsequent decades are being poisoned by privileged living for the moment, with the acquisition of material things defining their successes so that caring for their neighbor and others has been discarded. Drugs and pornography have become the real weapons of mass destruction in our children’s minds.” She has certainly put her finger on the Spiritual Infrastructure challenges of America.

Doris Francois’ ultimate advice to America in 2014 turns to the power of personal faith: “Pray and ask God to lead you. It is not about religion, but about what is in your heart. Love and respect the individual, not knowing when you may be touching God Himself.”

Yes, Doris Francois is an inspiring Profile in Resilience. May her example fortify us to pursue our calling from the Lord and experience true happiness which lasts into eternity.

What does Pursuing True Happiness look like to YOU?

What will be your True Joy during this Christmas season?

What inspiring Profile in Resilience have you been motivated by?

Help us learn from you… tell us your story!
Share with us in the COMMENTS below. 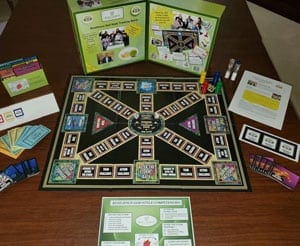 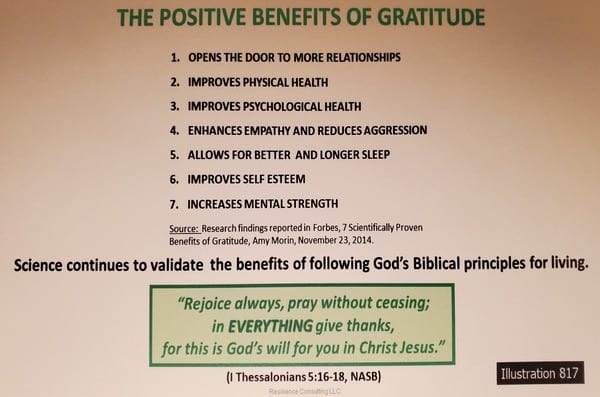 This Illustration goes with a question on an “Attitude of Gratitude.”
All of these benefits are empirical research findings.
Which one is most significant to YOU?
Tell us by sharing your COMMENTS below.

So true… thanks for this! “…suspend judgement of others in favor of grace.”

As You’ve Forgiven Me

That His great love is stronger than all device of sin,

And with His love He’s forgiven the debt I owed, and made me knew again.

Help me, Lord, to practice Your presence through forgiveness

And when I am offended, help me then to show forth kindness,

Forgiving from a heart of love as You’ve forgiven me.

(Song of mine many years ago, under copyright still with Nazarene Publishing House/Lillenas, © 1978 so cannot reproduce for profit, of course.)