God’s Word contains four primary analogies which help us understand Biblical principles. These analogies are farming, fishing, athletics, and the military. In addition, the overarching analogy which illustrates the cycles of life is Creation itself — squirrels gathering nuts for a long winter, the bleakness of winter turning into the vibrancy of spring, new life from dormant twigs. Jesus illustrated these through His many stories and parables.

This edition we will look at the farming analogy to discover Biblical truth and key resilience principles. In later editions, we’ll dive into the other analogies.

Whatever you may face in the week ahead, may you have a resilient week… avoiding and/or navigating the small and large disappointments of life. As it says on the back cover of the Resilience God Style Study Guide:

“Are you in the middle of a huge, debilitating storm? (RED)
***God will meet you there with comfort and counsel.

Or… maybe your are in the middle of bouncing back? (AMBER)***God will show you the way.
Or… maybe the sun is shining brightly for you now? (GREEN)… maybe the wind is at your back?… maybe your ‘well of courage’ is brimming with expectation?***God will help you ‘Get Ready’ for your next ‘body slam’ of life.”

Paraphrasing from Philippians 4:19, May God supply all your needs according to His riches in glory in Christ Jesus. And may you (and I) be Resilient — God Style!

PPS- Speaking of sharing with others, please let others know about this resource and encourage them to sign up for the Resilience God Style Newsletter as well.

“On the fields of friendly strife are sown the seeds that on other days,
on other fields will bear the fruits of victory.”~General Douglas MacArthur

Every farmer knows you need to plant to produce a harvest. Investment precedes return. Start with the smallest of seeds to grow the biggest of plants. Plant in the Spring, harvest in the Fall. We must sow if we are going to reap. We understand the principle well.

The mantra for Army Athletics is “On the fields of friendly strife are sown the seeds that on other days, on other fields will bear the fruits of victory,” an insightful quote by General Douglas MacArthur. A like-minded quote is “Don’t judge each day by the harvest you reap but by the seeds that you plant” by Robert Louis Stevenson. The point is that we must plant seeds of preparation to harvest excellence in execution — in the military, in athletics, in farming, and in life. We get what we pay for, we reap what we sow.

Jesus has a lot to say about sowing and reaping in Mark 4. While laying out the parable about seed which falls on various types of soil, he concludes “8 Other seeds fell into the good soil, and as they grew up and increased, they yielded a crop and produced thirty, sixty, and a hundredfold.” Jesus goes on to interpret the parable by explaining how the kingdom of God grows from a small seed into a plentiful harvest:

26 And He (Jesus) was saying, “The kingdom of God is like a man who casts seed upon the soil; 27 and he goes to bed at night and gets up by day, and the seed sprouts and grows—how, he himself does not know. 28 The soil produces crops by itself; first the blade, then the head, then the mature grain in the head. 29 But when the crop permits, he immediately puts in the sickle, because the harvest has come.”

The Apostle Paul stated this principle succinctly in Galatians 6:7 — Do not be deceived, God is not mocked; for whatever a man sows, this he will also reap. Joseph also understood the concept well — in several ways. He humbly understood that his labors as a rejected family member sold into slavery, an accused servant, and a betrayed prisoner were all preparation for his role as a protector for the nation Egypt and the people Israel. In essence, he paid his dues (seeds) on the “fields of friendly (and not so friendly!) strife” that were harvested by God in later years at a time of national crisis. As well, Jacob directly observed the principle of sowing and reaping as he planted and stored during years of rich harvest so that he would have provisions for his people in the lean years of famine.

So what does this have to do with RESILIENCE? Everything! The principle of sowing and reaping is deeply embedded in the Resilience Life Cycle. Specifically, the BEFORE phase is where we plant and prepare for the inevitable storms of life. These seeds look like memorizing God’s Word, developing close friendships, developing spiritual reflexes for tough times, and cultivating readiness to face whatever storm of life may come over the horizon. These seeds of preparation are then harvested in the DURING phase and beyond when we are able to react properly — when the car wreck happens, the diagnosis is received, the betrayal is exposed, the hurricane swamps us, and so on. When the tornado hits our world, it is too late to go back and plant seeds that will grow into the right spiritual preparation, the right reflexes to trauma, the right mindset that will help one survive or bounce back from a debilitating storm of life. We must plant in advance so we can harvest maturity, wisdom, clarity, and love in the middle of the storm.
This principle became very real to me in my early days at West Point. To set the stage, Jon Shine was a mentor to me and many others at the US Military Academy in 1969. He was a “man’s man,” captain of the gymnastics team, accomplished scholar, and a man who loved Jesus and “coached” many in their Christian faith. Jon graduated in June 1969 and went off to a place called Vietnam. In the fall of 1969, I was a “yearling” (sophomore) at the Academy and suddenly found myself in the West Point Cemetery, watching the color guard fold the flag and give it to Jon’s young widow on behalf of a grateful nation. At that time I could “hear” the Airborne Jumpmaster (ie- God) command “Get Ready!” We all knew that those taken into captivity in Vietnam were stripped of everything, yet we wanted to have God’s Word in us, not just with us. A small group of us began memorizing scripture like crazy — verses, chapters, books — to Get Ready for the storms which could come our way. Looking back, those seeds of Bible memorization and other spiritual disciplines were definitely harvested in later years, on other battlefields. Yes, if we sow, we will surely reap, in God’s proper time.
Do you have similar examples in your life? Maybe you are actually a farmer — you have certainly seen this principle in operation! Think about how parents patiently sow seeds in their children’s lives? Or consider preparation for hurricane season BEFORE the storms arrive. Possibly you have an example where you did not prepare, where you did not plant the right seeds in advance — what was the outcome? Were you swamped? What did you learn? What will you do differently? No doubt you have your own very real (and possibly raw) examples. Whatever our personal story, we can all benefit by being aware that we are always planting seeds — perhaps some good and some bad — perhaps some on rocky soil and some on fertile ground.
May we be wise in our planting, and confident in the harvest that will surely come. This is what being “Resilient and Ready” is all about!

So what about YOU?
Tell us your STORY.
Do your children and grandchildren understand this principle?
Share in the COMMENTS below.

Bring a Resilience God Style Conference to your Church or Organization 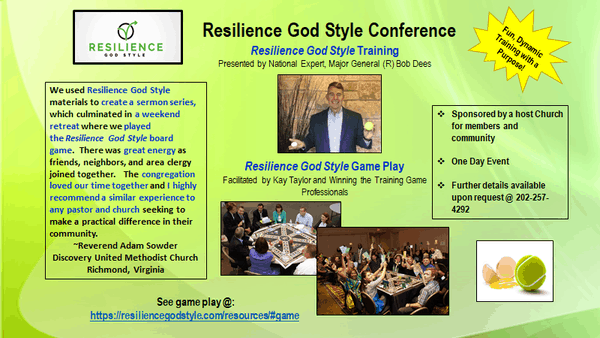 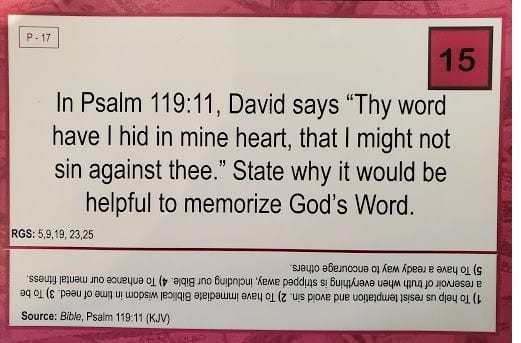 Discuss this one around your family dinner table.

Can you start planting the “seed of God’s Word” now for later use?

What works for you?

Tell us by sharing in COMMENTS.
Possible Answer: 1)To help us resist temptation and avoid sin. 2) To have immediate Biblical wisdom in time of need. 3) To be a reservoir of truth when everything is stripped away, including our Bible. 4) To enhance our mental fitness. 5) To have a ready way to encourage others.

(Regarding the Resilience God Style Conference Highlighted above)
“Resilience God Style is a blessing for everyone who interacts with these materials. Numerous people came up to me sharing the impact this study had on their journey of faith. We used these materials to create a sermon series, which culminated in a weekend retreat where we played the Resilience God Style board game. There was great energy as friends, neighbors, and area clergy joined together. On a personal note the best part for me was ending our sermon series by interviewing Bob Dees as part of worship. The gift was hearing directly from a true expert and man of God who lives this teaching out. The congregation loved our time together and I highly recommend a similar experience to any pastor and church seeking to make a practical difference in their community.”
-The Rev. Dr. J. Adam Sowder
Discovery United Methodist Church, Richmond, VA