Last week our feature article “No Man is an Island” discussed the importance of FRIENDS in living a resilient life, in navigating crisis.  I suspect that most of us have come to a greater appreciation of friends in these days of CV19, with social distancing and quarantine causing us to miss the healthy relationships in our lives.  Just as with CALLING, FRIENDS are a golden thread which weaves through all aspects of resilience in our lives.  Our “video blog” last week highlighted the essential nature of FRIENDSHIP through the life story of Jim Johnson.  I thank Jim & Brenda again, and note that many engaged on this critical topic.

This week we focus on the rather unglamorous topic of PERSEVERANCE.  How do we “keep on keeping on.”  In the Apostle Paul’s words, how do we “press toward the mark?,” not quitting, not wavering, not compromising, finishing strong.  Perseverance is an essential element of resilience, particularly in these days of COVID19.  See this week’s feature article for more on this.

May each of you have a safe and blessed week as you continue to Draw from your Well of Courage, Wait Well, Guard Your Primary Relationships, anticipate Springtime in America, abound in HOPE, nurture authentic FRIENDSHIPS that stand the test of time, and PERSEVERE from strength to strength in the power of God.

PS- As a reminder, our Resilience God Style Newsletters website page has an archive of all past RGS newsletter content for your future reference, or for you to share with others.PPS- I’m highlighting the RGS Training Game again — a fun activity with a purpose while you “shelter at home.”

“Blessed is the one who PERSEVERES under trial because, having stood the test, that person will receive the crown of life that the Lord has promised to those who love him.”
~James 1:12 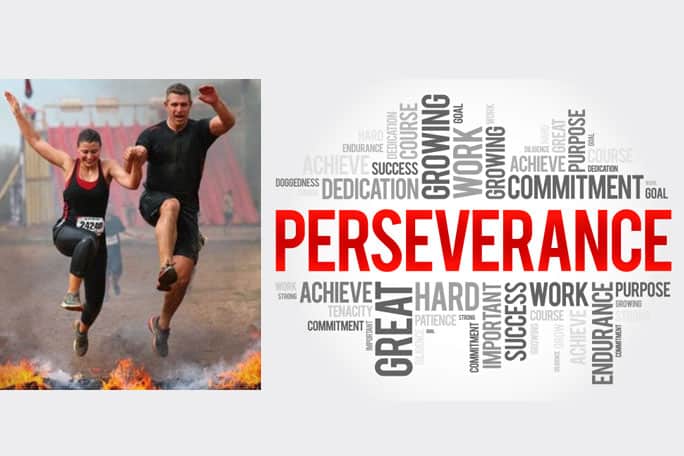 As I was rolling up my parachute, the elderly Dutch woman grabbed me by the knees in a tight hug.  With a translator, we learned her agitated words meant “We saw you coming.  The eagle from the sky (referring to the Screaming Eagle shoulder patch).  You saved my father!” (who had been apprehended by Nazis for possible execution on the same day).  This was certainly a profound moment as I humbly received gratitude on behalf of my 101st ancestors from a grateful daughter 50 years after the 101st Airborne had liberated Eindhoven, Holland, and beyond.  More importantly, consider the 101st soldiers who had parachuted into Holland on Operation Market Garden in September 1944.  They had left their families behind to risk their lives on another continent – they were “all in.”  This was not their first rodeo, merely a continuation of battle after battle.

To rewind the clock a bit, in June 1944 the “Screaming Eagles” landed by parachute and gliders in the dark of night behind the beaches at Normandy.  They fought through France, liberated Holland with more daring airborne insertions, and bought critical time in the fateful Battle of the Bulge at Bastogne.  Then they fought through Germany, ending up at Hitler’s Eagles Nest in southern Bavaria, and beyond by May 1945.  This was PERSEVERANCE, a picture worth a thousand words. These heroic veterans were persistent and steadfast – one dusty, often bloody, boot in front of the other, again and again – saving lives, reuniting families, liberating nations, and unhinging the entire continent of Europe from the ravage of evil empires.  What Resilient Warriors, what role models of courage, commitment, and PERSEVERANCE!  Their WWII example was mirrored many times over by other storied Army units, as well as the valiant warriors of other Services of the military.

That was then, and a heroic time it was.  TODAY in the COVID19 pandemic we also see heroism; we see amazing PERSEVERANCE, persistence, steadfastness in many Americans today.  Peering through the face shields and masks of our healthcare providers and first responders in PPE, we see the same determination and PERSEVERANCE.  Observing the selfless leadership of business owners who sacrifice salaries for their employees, or the many citizens who are reaching into their communities to provide for the hardest hit Americans; we see the same determination, the same PERSEVERANCE.  These modern-day Resilient Warriors are also putting one boot in front of another, not giving up or slowing down until the job is done. They also have our great respect and appreciation.

The Bible illustrates PERSEVERANCE in many ways.  Vines dictionary would describe it as “to continue steadfastly in a thing and give unremitting care to it.”  The primary Greek word used for perseverance in the New Testament is pros (towards) kartereo (strength).  This provides a great picture – while on an arduous journey (physical, mental, spiritual, emotional, relational), one is “moving towards strength.”

That’s it!  To PERSEVERE, we move toward strength.  We let strength pull us forward —  BUT this must be God’s Strength!

“I can do all things through Him who strengthens me.”
~Phillipians 4:13

What a powerful resilience tool – the sure knowledge that God is pulling you forward in HIS strength.  It reminds me of many a Ranger endurance run when I would grab an imaginary rope in front of me to pull myself forward. What a joy to know it was God at the other end of the rope.

Here are a few Biblical exhortations to PERSEVERE:

As a final note, defining perseverance is not hard – we all have a feel for what it is.  Acting with perseverance IS hard.  As with resilience, we learn to persevere by persevering through increasingly tough challenges – getting stronger, more resolute, and more confident that “with God all things are possible.”  May this be a reality for all of us – during this pandemic, through economic hardship, in spite of physical ailments, and moving over, under, around, and through anything else that opposes our call before God.

Using one of the blank question cards in the Resilience God Style Training Game, here is a write-in question about PERSEVERANCE.  Try it with your family or friends at home, or on a ZOOM Call! 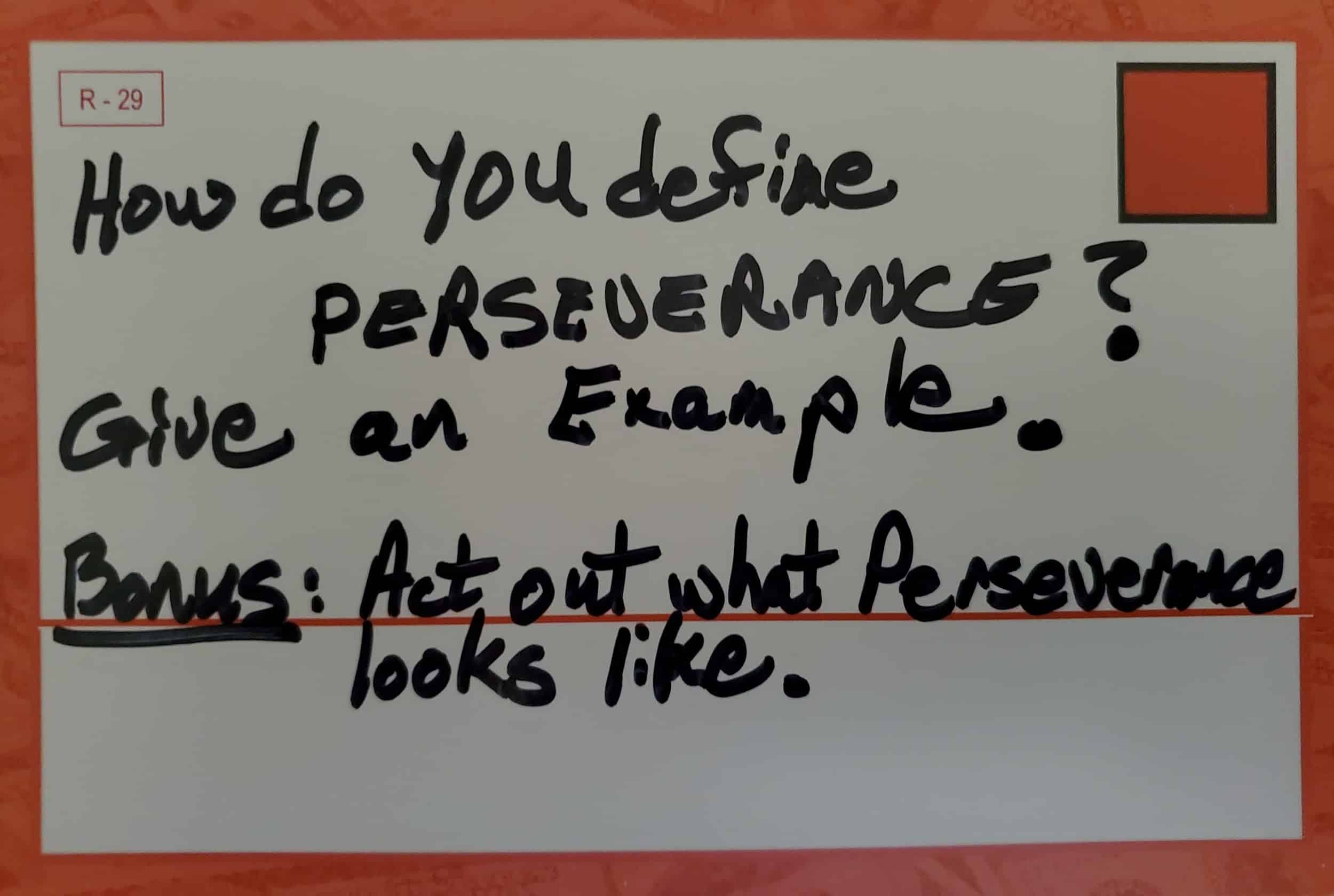 Suggested Answer:  Perseverance is “to continue steadfastly in a thing and give unremitting care to it.”  Another definition might be “to move forward from strength to strength, in God’s power.”  Examples are today’s healthcare workers fighting COVID, many other contemporary examples around us, and many Biblical figures such as Job, Paul, “heroes of the faith” depicted in Hebrews 11, and certainly Jesus.  Bonus:  Perhaps act out walking up a steep slope with an anguished but committed look on your face.  See who gives the best impression.  Have fun with it!  Send me a picture!

“A Long Obedience in the Same Direction”by Eugene Peterson This Christian classic examines many facets of resilience,including perseverance (Chapter 11). 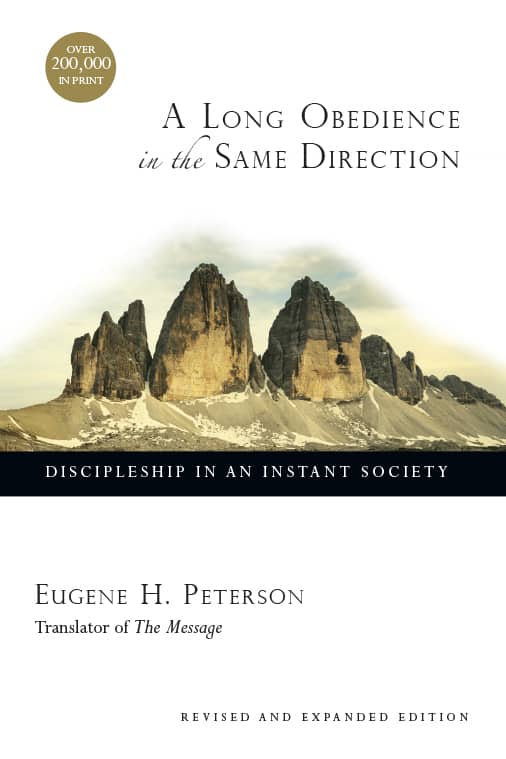 Hi Bob, First thank you for your resilience ministry. It was refreshing to hear Jim’s story. Both you & Jim are part of my 9-11 group. Because of the time you and I spent during your “Resilient Warrior” classes, I had a foundation to draw on when my “Body Slam” came in 2015 and it provided the well of resilience to draw on & the steps to carry on and fight the battles. Blessings to you. Your Brother in Christ.
~Gene Frazier, Williamsburg, VA
Thanks for this great reminder of the vital importance of our friendships.   Numerous contributions by friends over the years in mine and Susan’s lives have shown us the value of friends who have walked with us during good and difficult times.
~Rob Wyatt, CS, CO