Skip to content
Issue 4: Do Not Grow Slack in Your Day of Distress

As the weeks fly past, it is important to be intentional about certain things, lest we be held captive by the “tyranny of the urgent” for our entire lives. While all of us want to “finish strong,” we are often distracted by things that diminish our physical, mental, emotional, and spiritual strength. Ultimately this can lead to a lack of will to do the things which are truly significant or we lack the conviction to stand firm when our “day of distress” arrives. This week we will focus on “Standing Firm in Your Day of Distress.”

In this edition, we provide an essay describing an amazing Profile in Resilience, Pastor Dietrich Bonhoeffer, one who truly finished strong. As well, we provide a featured Resilience Resource, test your resilience acumen with another Resilience God Style Training game question, and dip into our Resilience God Style Community mailbox.
My prayer for each of us continues to be that we might learn and model Christ-like resilience as we navigate the storms of life and help others do the same. Jesus said, “In the world you will have tribulation, but take courage, I have overcome the world.” (John 16:33) Resilience God Style allows us to be the overcomers which God intended us to be.
Respectfully in Christ,
Bob Dees

If you are slack in the day of distress, your strength is limited.”

Do Not Grow Slack in Your Day of Distress

His room at Flossenburg was simple—nothing on the plaster walls—just a wooden door with a big lock, a few feet from where he was executed, a few weeks before Allies liberated the Flossenburg Nazi German concentration camp. I was humble and contrite as I looked at the garden wall where they killed German Pastor Dietrich Bonhoeffer. He was such a heroic figure, such a fighter for the faith, a warrior against the apostasy of the German Church which turned a blind eye to Adolf Hitler’s Jewish Holocaust and Nazi Germany’s brutal domination of other nations.

From the accounts of his own writings and those of fellow prisoners, Dietrich Bonhoeffer did not grow slack in his day of distress (Proverbs 24:10 – “If you are slack in the day of distress, your strength is limited.”). In short, he remained strong and faithful to God and others until the SS executioners ended his life. I find this both inspiring and convicting. If Dietrich Bonhoeffer did not grow slack under the stress of a Nazi concentration camp, should we not likewise lean into every day that God gives us breath and purpose, moving forward with the strength that only He can provide?

The Warrior David penitently prayed in Psalm 51, including “sustain me with a willing spirit.” Isn’t this what we all need EVERY DAY – a willing spirit to lean into God’s presence, to love Him and serve others, to “seek first His Kingdom and His Righteousness” (Matthew 6:33)? If you are like me, this can sometimes be a struggle.

Yet, an unwavering commitment and MINDSET to “seek first” on a daily basis lies at the heart of a “willing spirit” and ever growing Resilience – God Style. For me, that starts with reading God’s Word and talking to Him in prayer. I suspect the same is true for you.

Jesus clearly did not grow slack in His day of suffering on the cross. In Hebrews 2:9, it says of Jesus,

“But we do see Him who was made for a little while lower than the angels, namely, Jesus, because of the suffering of death crowned with glory and honor, so that by the grace of God He might taste death for everyone.”

Our specific challenge to finish strong is contained in Hebrews 12:1-3:

“1Therefore, since we have so great a cloud of witnesses surrounding us, let us also lay aside every encumbrance and the sin which so easily entangles us, and let us run with endurance the race that is set before us, 2 fixing our eyes on Jesus, the author and perfecter of faith, who for the joy set before Him endured the cross, despising the shame, and has sat down at the right hand of the throne of God. 3 For consider Him who has endured such hostility by sinners against Himself, so that you will not grow weary and lose heart…”

I once heard an unattributed story about an Allied soldier in a Nazi concentration camp close to the end for Nazi Germany. Rumors were rampant that the Nazis would kill all the prisoners before fleeing, perhaps even the next morning. This prisoner and his comrades prepared for the worst, made their peace with God, and waited for the fateful knock at their cell doors. The knock came, the prisoner braced for death. The door was flung open, and the simple command “Yank, come with me, you are now free.” Allied liberators had arrived first. What a life giving surprise, what deliverance!

Each of us must face our “days of trouble,” and ultimately our day of death. We do not know when that will be. If we are to finish strong, we ‘must not be slack in our day of distress, because our strength will be limited.’ (Prov 24:10, paraphrased) The example from Jesus, Bonhoeffer, this unnamed Allied POW, and many other faithful believers is to lean into God whatever the expected outcome, to be faithful to our call wherever it leads, to finish strong despite the cost.

What do YOU think?

Is finishing strong important to you?

What examples would you provide of someone being faithful to the end?

How will you avoid growing slack in your day of distress? 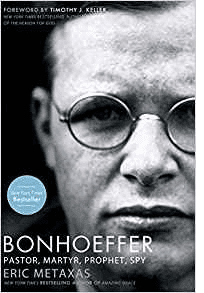 This month’s Resilience Resource is Bonhoeffer by Eric Metaxas. The book is an amazing Profile in Resilience. Pastor Dietrich Bonhoeffer clearly did not grow slack in his day of distress, inspiring millions to stick to their calling and commitment, even when faced with certain death.

Since we don’t know when adversity will come our way, we must be ready every day.

How would your team answer this question??? 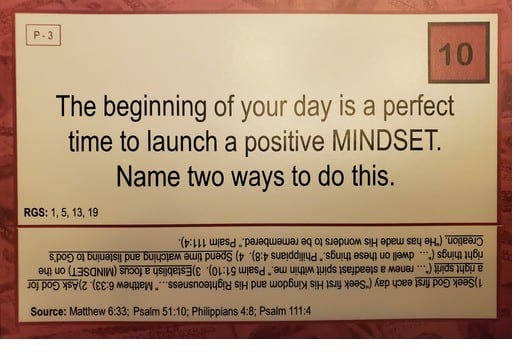 Suggested Answer: 1) Seek God first each day (“Seek first His Kingdom and His Righteousness…” Matthew 6:33). 2) Ask God for a right spirit (“…renew a steadfast spirit within me.” Psalm 51:10). 3) Establish a focus (MINDSET) on the right things (“…dwell on these things.” Philippians 4:8). $) Spend time watching and listening to God’s Creation (“He has made His wonders to be remembered.” Psalm 11:4).

Great stuff, Bob. Thanks. I am struck that grace, wisdom, and resilience usually accompany each other. ~Glen

Good observation. Grace with self is as key as grace with others!