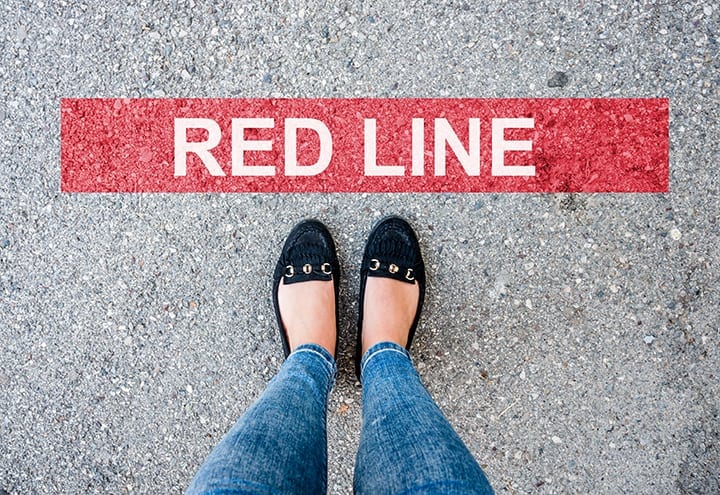 At the famous Battle of the Alamo in 1836, Colonel William Barrett Travis drew a “Line in the Sand,” stating “those prepared to give their lives in freedom’s cause, come over to me!”  This “line in the sand” became the point of no return for the brave Texans who crossed it to fight to the death. It was a symbol of conviction and commitment, a life and death inflection point.

A popular term today for such a boundary is “RedLine,” identifying an unwillingness to violate one’s values in thought, word, or deed.  “RedLine” is also a symbol of conviction and commitment, a predetermined decision to go “this far and no further.” No doubt you are familiar with the many uses of “redline:”  political redlines (often used in international relations or domestic politics), health redlines (pushing our bodies too far), auto redlines (the maximum rpm an engine can pull), insurance redlines (the limit for issuing insurance to clients with high risk), or many other uses.

This redline concept also applies to personal resilience.  It represents the difference between tennis ball and egg, between bend or break, between irreparable loss and victorious recovery.  This is stated well in 2 Corinthians 4:7-10:

“7 Yet we who have this spiritual treasure are like common clay pots, in order to show that the supreme power belongs to God, not to us. 8 We are often troubled, BUT not crushed; sometimes in doubt, BUT never in despair; 9 there are many enemies, BUT we are never without a friend; and though badly hurt at times, we are not destroyed. 10 At all times we carry in our mortal bodies the death of Jesus, so that His life also may be seen in our bodies.”  (Good News Translation)

I have often said that these verses are the primary Resilience passage of the entire Bible.  Really powerful — troubled (Yes, we all are!), BUT not crushed (defeated, damaged beyond repair).  The conjunction “BUT” is the redline here — this far and no further, the point of resilience, the confidence and conviction that bad things happen to all of us, BUT they don’t have to destroy us.  This is what Resilience God Style looks like, particularly when we consider verse 10: “… so that His life also may be seen in our bodies.” These are the difference makers between human effort (to run faster, jump higher, be resilient) and Resilience God Style — the “LIFE of Jesus” seen in our bodies and the indwelling presence of God’s Holy Spirit which allow us to “bounce higher than ever before!”

“Get your ‘BUT’ in gear, Men” is how I would put it for a men’s conference.  It is critical for each of us to determine our personal redlines to pre-determine and rehearse our response to temptation, trauma, relational trials, or the stressors of transition.  Some Biblical Examples:

“We fall the way we lean,” said the famous Swiss physician, author, and Christian counselor, Paul Tournier.  This is certainly true in a physical sense (at least that is what I learned in Plebe boxing at West Point!), but it is also true in a moral, psychological, emotional, and spiritual sense.  I mentioned this quote when talking to Defense leaders in Kenya a number of years back. This caught the ears of the Kenyan Chief of Defense who strongly admonished his team of generals (in a culture beset with corruption), “We have been leaning in the wrong direction, today we must change that!”  In essence, he was telling his leaders that they must establish the right redlines in their personal and professional lives. This is true for all of us — we must work hard to lean in the right direction morally, emotionally, spiritually — we must establish the right redlines.

Having just entered into a New Year — 2020! — , most of us have probably made New Year resolutions.  In essence, we have probably committed to “leaning in the right direction” regarding diet, or exercise, or kinder interactions with others, or possibly even a greater intimacy with our Lord Jesus. Hopefully, we have also established the right redlines for 2020 — I will pursue these positive activities, BUT (redline) I will flee negative influences (“Now flee from youthful lusts and pursue righteousness, faith, love and peace, with those who call on the Lord from a pure heart.” — 2 Timothy 2:22).

These commitments are important, fortifying us in the New Year to resist the many trials and temptations that would have us lean (and possibly even fall) in the WRONG direction. Given that Jesus tells us that in the world we will have tribulation (John 16:33), we know that we will fall in various ways in this life — we will get “body slammed” at times by self, others, inexplicable tragedies, and unseen spiritual forces.  Hence, it is only common sense to purpose to lean in the RIGHT direction in the New Year. It is only common sense to have the right redlines in place, BEFORE the inevitable trials come to our doorstep in 2020.

May it be so for each of us!

Do you have personal redlines in place as you enter 2020?

Do your children and grandchildren understand this important concept?

How would you add to this short thought about redlines?

Help us learn from your wisdom and life experience.