Skip to content
Resilient Enough To Get Back In The Saddle

I spent time with a young officer who had worked for me in the past. He was getting ready to assume command of a battalion sized formation (roughly 700 troops) which would deploy to combat. In an unusual moment of candor for a military professional, he looked at me with tears in his eyes, soberly reflecting, “Sir, I don’t know if I can get back in the saddle.” This brave young officer, one of the finest leaders I have ever observed, had within the past year led another outfit in combat, experiencing significant loss of life and the associated trauma to families and fellow troopers. The weight of this leadership responsibility for human life and livelihood, the sustained press of constant vigilance, the frequent question, “Could I have done more?” (to save their lives), and the prospect of experiencing another “bloody deployment” had become almost overwhelming for this young leader, and for his wife and family.

It was clear that he had dipped very deeply into his well of courage. He was not sure if he could go on, yet he did. Through rest, reflection, the restorative power of personal faith, and an amazingly supportive family, he did get back in the saddle. He was uniquely equipped to provide life-giving leadership to a team which needed him. Because of his own resilience, he was now able to impart hope, courage, optimism, competence, and character to those he would lead through another round of noble accomplishments and numbing losses.

The resilience of this young leader has kept him in the fight, on behalf of the many who would conceivably perish without him. As importantly, his crucible leadership experiences are equipping him to lead thousands and tens of thousands. Having led and learned through challenging formative leadership experiences, this young leader will soon walk into a destiny of increased responsibility, service, and personal fulfillment, not unlike the good servant who properly stewarded his master’s talents: ‘“ Well done, my good servant!’ his master replied. ‘Because you have been trustworthy in a very small matter, take charge often cities.” (Luke 19: 17, NIV)

I venture to say that in your own marketplace of leadership (in the public or private sector, on the world stage or in the nursery, as a uniformed servant facing death daily or as one facing the daily monotony of shop life, in the complexities of a corporation or the high risk of small business ownership, or name your specific marketplace…), you can identify with most of these questions and challenges. I offer that you too sometimes wonder if you can get back in the saddle. I strongly suspect that resilience is a highly sought after quality for you as a leader, as it is for me and so many others. 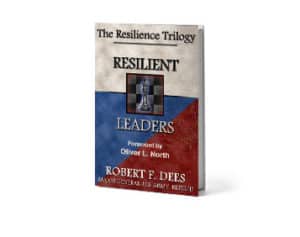 An excerpt from Resilient Leaders by Bob Dees.