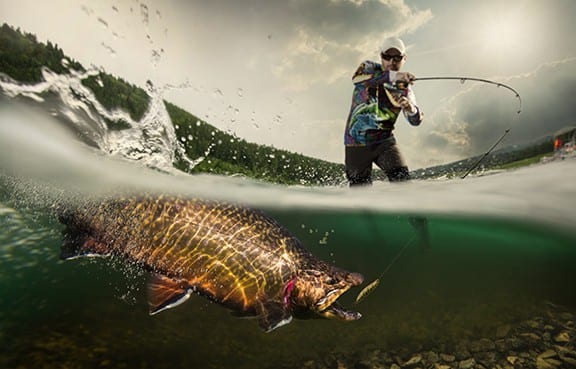 Dusk is closing in over the small pond.  Creeping along the bank I gently toss my “Jitterbug” (a wiggly top-water fishing lure that causes fish to crest the water’s surface to capture the tantalizing bait) amid the reeds in shallow water just a few feet away.  After maybe ten seconds of breathless expectation, the water literally explodes as the big bass strikes his prey at the end of my fishing line. The fight is on – the hope of landing a five or six pound monster bass grows – then it ends as quickly as it started.  Almost had him! I think my line broke! Man, was that a big one! Alas, the travails of a fisherman – “close, but no cigar!”

In my moment of disappointment, I start to process what makes the difference between hero (big fish, bragging rights) and zero (no fish, broken line, humble defeat).  What is the critical ingredient for landing fish, or more broadly for living life? We have previously mentioned the four primary analogies in Scripture: farming, fishing, athletics, and the military.  Let’s think about fishing, starting with Luke 5:

4 When He had finished speaking, He said to Simon, “Put out into the deep water and let down your nets for a catch.” 5 Simon answered and said, “Master, we worked hard all night and caught nothing, but I will do as You say and let down the nets.” 6 When they had done this, they enclosed a great quantity of fish, and their nets began to break; 7 so they signaled to their partners in the other boat for them to come and help them. And they came and filled both of the boats, so that they began to sink.

Ah ha!  At least I’m not alone.  The disciples “fishing line” (their nets) broke as well.  What’s that all about? We’ll dive into some thoughts on this, but first let’s look at another great fishing story in Scripture from John 21:

6 And He said to them, “Cast the net on the right-hand side of the boat and you will find a catch.” So they cast, and then they were not able to haul it in because of the great number of fish. 7 Therefore that disciple whom Jesus loved said to Peter, “It is the Lord.” So when Simon Peter heard that it was the Lord, he put his outer garment on (for he was stripped for work), and threw himself into the sea. 8 But the other disciples came in the little boat, for they were not far from the land, but about one hundred yards away, dragging the net full of fish. 9 So when they got out on the land, they saw a charcoal fire already laid and fish placed on it, and bread. 10 Jesus said to them, “Bring some of the fish which you have now caught.” 11 Simon Peter went up and drew the net to land, full of large fish, a hundred and fifty-three; and although there were so many, the net was not torn.

Now isn’t this interesting.  The nets in John 21 DID NOT BREAK — they held fast and captured the entire harvest of fish – 153 large fish!  I wonder what made the difference?

Here’s something to consider:  the disciples in Luke 5 were peering through a glass dimly, barely able to discern the emerging nature of the man Jesus they decided to follow.  They saw His miraculous power, but were still clueless about the coming reality of a risen Christ. In essence, they were operating in their own frail human strength and understanding.  Symbolically, their nets broke, illustrating their human inadequacy – a commentary on much broader issues of a life filled with both tribulation and success.

Contrasted to the Luke 5 disappointing fishing expedition is the John 21 bountiful harvest of large fish.  While they were fishing the same waters, the timing and circumstances were quite different – now they had seen Jesus crucified, and were soon to see for themselves that He had risen from the dead in resurrection power.  They also reflected back on his earlier comments that God would send a Comforter (The Holy Spirit) after Jesus left Earth.

So what made the difference?  It was God. Viewing this with spiritual eyes, God’s Holy Spirit was the critical differentiator.  Some familiar verses emphasize the principle:

Related to the subject of RESILIENCE, many secular resilience programs exhort us to run faster, jump higher, do better without the means to accomplish the desired actions.  Human effort is good and necessary, but it is not sufficient when dealing with the deepest and most significant of issues surrounding human behavior and meaning in life. Hence, God in all his forms (Father, Son, Holy Spirit) is the “secret sauce” that makes the difference, the reason we call it Resilience GOD STYLE.  This spiritual source of power, understanding, and wisdom allows us to be truly resilient — “But in all these things we overwhelmingly conquer through Him who loved us.” (Romans 8:37)

Let me conclude with a couple of practical applications of the fishing bookends we have discussed:

Yes, Jesus was a master teacher, coach, and leader.  He used the power of story to make life precepts real and relevant – even to some crusty old fishermen, as well as you and me.  As a role model for each of us, the shepherd warrior David also understood that his true sufficiency was in the Lord — “My flesh and my heart may fail, BUT God is the strength of my heart and my portion forever.” (Psalm 73:26)

May our nets not break as we depend upon God.

May we be Resilient – God Style!

Do you have any “fish” stories?

Has your net been breaking?

How can you make your net stronger?